Awaiting more stock
The M-710 series of Fanuc designed for the handling of medium loads, with a lightweight structure of thin wrist and solid arm. He is a specialist in a wide range of applications of handling and force with loads of up to 70 kg. providing high speed, flexibility and reliability; with degree of protection IP67 for difficult environments, offers greater precision and performance, easy access to narrow places and large work envelope thanks to its position of mounting on roof and angle.
M-710iC / 45M industrial robot high inertia version; with slim structure and compact wrist that provides greater flexibility, characterized by offering greater speed and optimal alternative in handling tasks where space is vital. You can perform maneuverability tasks in several directions thanks to the 360 degrees of rotation of J1.
R-30iB control system
Latest generation of advanced, efficient, compact and stackable FANUC technology, improved productivity, with modern integrated hardware and more than 250 software functions. Designed to be more intuitive, it optimizes the power to decrease energy consumption, high performance in cycle times with greater speed and precision.
It has a high-performance integrated programmable PMC control system that can access the complete robot I / O system, which allows easy separation or asynchronous control of peripheral devices without this having negative effects on robot performance. The different mounting positions allow you to save space, easy integration into production cells, installation of various robots. The R-30iB control systems use FANUC's patented secure software, which means you do not need to worry about viruses, hackers or stability issues. With iPendant Touch intuitive, smarter and easier to use.
Main specifications 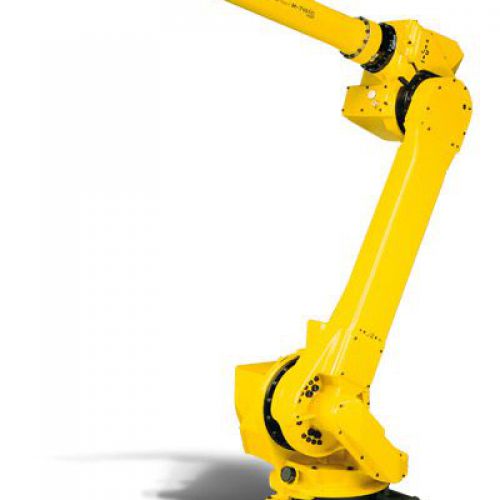